Frost & Sullivan estimates the global regenerative medicine market to be valued at about $45 billion, and expects that the market will reach $67.5 billion by 2020. Read more about recent advances and innovations using CAR T cells to treat a host of diseases, including and especially cancer. 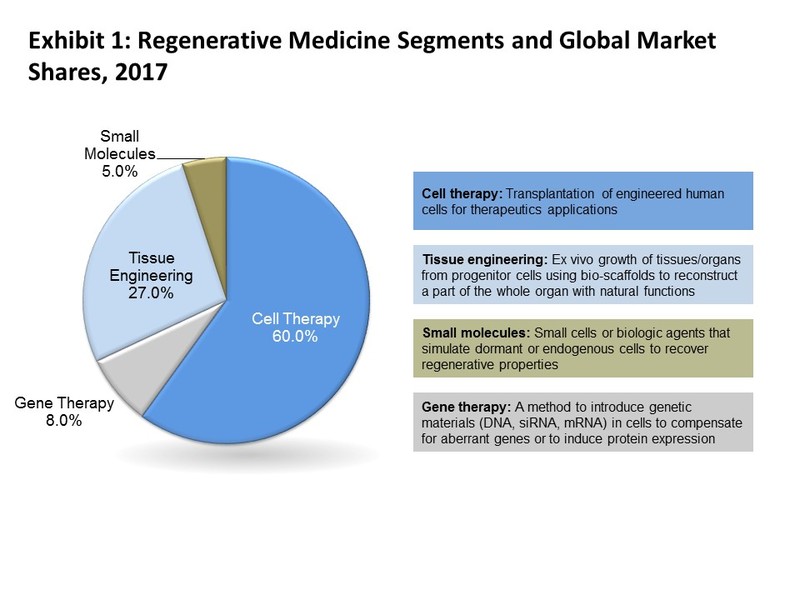 Cell therapy is clearly the largest segment and the highest revenue generator, with nearly 50 cell therapy-based regenerative products approved and marketed. A leading technical approach to cell therapy is the use of chimeric antigen receptor (CAR) T cells. These are engineered receptors that are grafted on to the T cell, a type of white blood cell that plays a key role in cell-mediated immunity. CAR T cells are increasingly being used to treat a host of diseases, including and especially cancer. Brief profiles of some of the recent advances and innovations are provided here.

Novartis’s Kymriah was the first-ever CAR T-cell therapy to receive regulatory clearance from the U.S. Food and Drug Administration. In August 2017, Kymriah was cleared for the treatment of acute lymphoblastic leukemia in young adult patients—particularly those who did not respond to conventional medications. Kymriah is a one-time therapy that uses and trains the body’s own T cells to fight cancer. In May 2018, Kymriah was cleared for its second indication: the treatment of B-cell lymphoma in adults.

A team of scientists from UCLA, the University of Washington and the Fred Hutchinson Cancer Research Center are developing an engineered hematopoietic stem and progenitor cells (HSPC) platform for the management of simian/human immunodeficiency virus (SHIV) infections. The team has created genetically modified blood-forming stem cells that express the ability to produce cells that can detect and destroy HIV-infected cells. The team tested this novel platform on non-human primates, with satisfactory results. This is the first study to establish clinical relevance of HSPC-derived CAR T-cell therapy in animal models for HIV/AIDS. The success emboldened the team to further refine the treatment; once designed for clinical use, it could have a considerable impact on the cost of therapy and the dependence on antiviral medications. However, the researchers acknowledge that clinical trials are still a few years away.

TxCell is a biotechnology firm that develops T-cell therapies especially for inflammatory diseases such as Crohn’s disease, bullous pemphigoid, and autoimmune diseases such as lupus nephritis and multiple sclerosis. TxCell has two platforms that it uses to manufacture T cells: ASTrIA and ENTrIA. These platforms allow the activation of T cells around the inflamed tissues, providing cytotoxic activity to treat localized inflammation. TxCell is developing 10 new CAR T-cell programs in collaboration with the University of British Columbia, Ospedale San Raffaele (Italy) and the Lubeck Institute of Experimental Dermatology (Germany).

The CAR T therapies that have been approved so far have been patient-specific. Cellectis became the first company to develop off-the-shelf, allogeneic CAR T cells that it designs and manufactures for other pharmaceutical companies.  One of the interesting features of its CAR T platform is a built-in safety switch. It imparts a self-destruct feature, by which the cells are destroyed in case there are adverse reactions in the body.

From the funding that pharmaceutical companies and research organizations are able to attract for research and clinical testing, from the patent filing trends, and from the number of new therapies that have received regulatory clearance over the last two years, it is clear that CAR T cells are the flavor of the month for the pharmaceutical industry. Between 2007 and 2017, more than 275 clinical trials have involved CAR T cells for various indications—more than 100 in 2016 and 2017 alone. In the next 10 years, cell therapy—the use of CAR T-cell platform in particular—will be further explored for the treatment of various types of cancer and autoimmune and neurological diseases.