Frost & Sullivan’s analysis of the National Institutes of Health clinical trial database reveals approximately 16 late-phase clinical studies that are validating the use of biomarkers for the management of diabetes and obesity. Read more about what's on the horizon.

Biomarkers are measurable indicators of a biological condition. Medical research draws a nuance between these biochemical occurrences that can indicate a state of well-being (or lack thereof) and biological signals that can be monitored and recorded for the same purpose. To illustrate this difference, prostate-specific antigen (PSA)—a protein that is secreted by the prostate gland and is a measure of prostate cancer—is a biomarker, whereas the electrical activity of the heart (as measured by an electrocardiogram) is a biosignal. It is important to make this distinction to emphasize the progress made in the field of cellular and molecular biology, and how cells, proteins, genes and other biomolecules are fast becoming central to clinical diagnoses and medical research. From this distinction, it also becomes evident that the use of biosignals predates the use of biomarkers for disease detection; it follows that biomarkers will be an important and celebrated research tool going forward.

The use of biomarkers for disease detection finds favor with clinicians in managing the explosive growth of what are referred to as lifestyle diseases. According to the World Health Organization (WHO), conditions that are closely related to lifestyle choices claim 16 million lives every year. The organization went so far as to label these conditions, which include diabetes, heart disease and even some cancers that are born out of unhealthy lifestyles, a “slow-moving public health disaster.” Diabetes particularly stands out: the WHO estimates that one in 11 adults (more than 415 million people) in the world is diabetic; an estimated 642 million (one in 10) in the world will suffer from diabetes by 2040, which will form the basis for several more health conditions.

The urgency in combatting and managing diabetes aligns well with the strides made in biomarker-based medical research. Based on its analysis of the biomarker industry, Frost & Sullivan has categorized the space by the type of biomarker, the primary application of those biomarkers, and the indications for which they are used. Exhibit 1 captures this segmentation, which is discussed in more detail below. 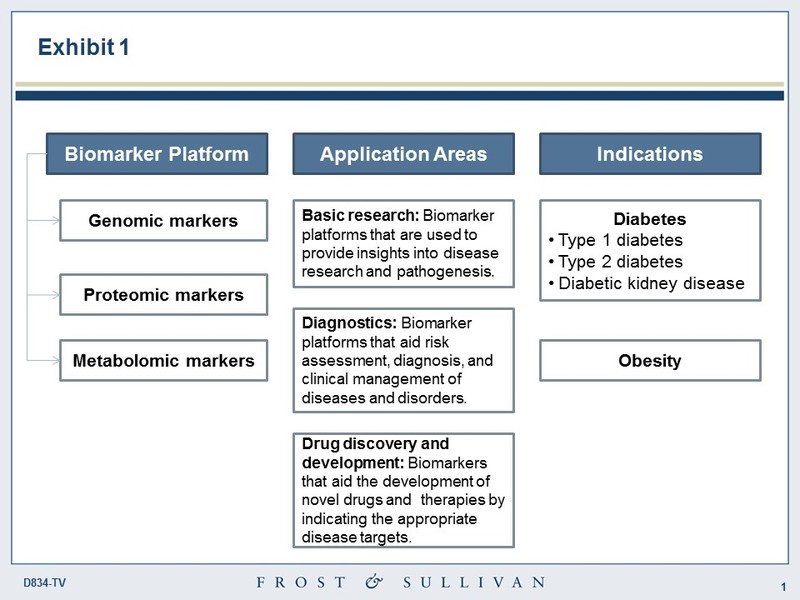 Proteomic biomarkers: Proteomic analysis techniques, including enzyme-linked immunosorbent assay (ELISA) platforms, are often used to measure proteomic markers such as neutrophil gelatinase-associated lipocalin in urine samples for assessing diabetic nephropathy. Notable companies in this segment are Pacific Biomarkers of Seattle (one of the first companies in this space) and Proteomics International of Australia.

Proteomics International’s PromarkerD test kit can predict diabetic kidney disease and the decline in renal function in diabetic patients based on a simple blood test. Its flagship product can detect three proteomic biomarkers in the blood sample.

Genomic biomarkers: Genetic markers, which are important for the diagnosis of cancer, are still being evaluated across diverse direct-to-consumer testing kits for diseases including diabetes and may be useful risk predictors in the future. However, such tests have not been clinically validated in large studies yet. A likely short-term application of genetic markers could be their use in drug development. Clinical studies have identified TXNIP, a gene that codes for thioredoxin-interacting protein, as a potential marker for diabetes risk and treatment response. Further studies that explore the role of the TXNIP gene in diabetes pathogenesis could open novel avenues for identifying molecular drug targets.

deCODE Genetics (Reykjavik, Iceland), Interlukin Genetics (Waltham, Mass.), Quest Diagnostics (Madison, N.J.), and Portugal-based Gene PreDiT are exciting young companies that are pursuing the identification of biomarkers for diagnostics and for pharmaceutical research. Gene PreDiT is developing a test for detecting mutations in the GP0044 gene (a biomarker for body weight and fat content) likely to respond optimally to GPP846 therapy in obese individuals. GPP846 is a compound that is believed to modulate lipid production and accumulation in the body.

Metabolomic biomarkers: Still in infancy, metabolomic markers are likely to emerge as the preferred markers across diabetes and obesity. Researchers are trying to discover and validate unique biomarker panels across obesity, type 2 diabetes and gestational diabetes.

Metabolon (Morrisville, N.C.) is a metabolomics technology company that develops platforms for precision medicine. Metabolon offers Quantose IR, a laboratory-developed test for evaluating insulin resistance using a single, fasting blood sample. Quantose IR measures insulin, oleic acid, linoleoyl-glycerophosphocholine (LGPC) and alpha-hydroxybutyrate (AHB) using a proprietary algorithm. The Quantose IR test is capable of detecting the transition toward cardiovascular disorders and diabetes several years prior to changes in hemoglobin A1C and fasting plasma glucose levels. It is the only such laboratory-based test available in the United States, Mexico and Europe.

Frost & Sullivan’s analysis of the National Institutes of Health clinical trial database reveals approximately 16 late-phase (phases 3 and 4) clinical studies that are validating the use of biomarkers for the management of diabetes and obesity. The key indications include type 2 diabetes, obesity, dyslipidemia, inflammation, impaired glucose tolerance, ketoacidosis and Prader-Willi syndrome. Exhibit 2 provides a snapshot of the clinical trial landscape. 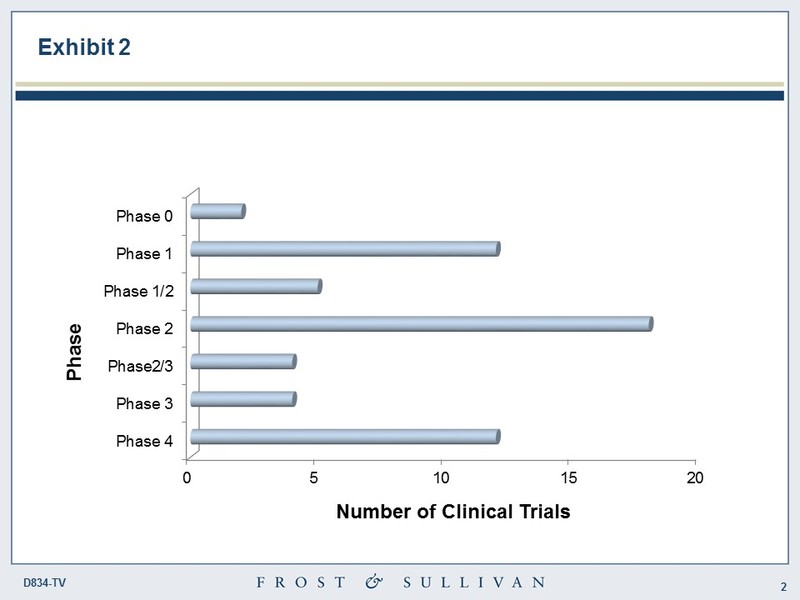 Some of the key biomarker research challenges relate to validation. However, the integration of biomarker studies with Big Data platforms is likely to prove useful in analyzing the huge lake of biomarker data that is being generated globally. Researchers are interested in exploring the association of diabetes with obesity, progression to diabetic kidney disease, and inheritance patterns.

The true potential of biomarkers may lie in wearables for continuous health monitoring. In May 2017, researchers from the Ulsan National Institute of Science and Technology and Kyungpook National University in South Korea announced the development of a contact lens that can detect, with the help of built-in sensors, biomarkers in the wearer’s tears. The researchers said the lens would be able to non-invasively measure intraocular pressure, glucose levels in the tears, and several other metrics that would serve as indicators of health conditions.

Although the translation of research into clinical benefits may take some time, the effects of personalized, biomarker-based management of diabetes and obesity-related disorders are likely to increase in the near future. Top-tier companies including Nestle and GE Healthcare are exploring novel biomarkers for visceral obesity. The German Institute of Human Nutrition is studying metabolomic biomarkers across type 2 diabetes.