Frost & Sullivan estimates that the companion diagnostics market will reach $6.9 billion globally by 2020, with oncology being the biggest market. Read more in the latest analysis.

Personalized medicine refers to the practice of administering the right dosage of the right drug at the right time. The emphasis on the various attributes of therapy—patient type, drug, dosage and timing—implies that conventional therapy is rather imprecise.

The Need for Personalization

Several clinical studies and data from clinical registries clearly establish that patients respond differently to the same medicine. For example, 33% of patients suffering from depression fail to respond to anti-depressant medications, 43% of diabetics do not respond to the same diabetic drug, and as many as 75% of cancer patients fail to respond favorably to the same prescribed cancer drug. Clearly, as far as therapy is concerned, one size does not fit all.

What’s more, not only do these patients not respond positively to prescription medication, but they can in fact respond negatively to the drug. The newly-launched U.S. FDA Adverse Events Reporting System (FAERS) registered 5.4 million serious reports, and more than 1 million deaths, due to adverse drug reactions (ADRs) over the last 10 years. In fact, a day after the FAERS went live, biotech stocks fell drastically, partly because of the shock effect of the statistics, and partly because this increases the transparency in matters concerning safety. Clearly, as far as therapy is concerned, what cures Jack can cause severe ADRs in Jill.

There is sufficient evidence to suggest that if patients realized that they had a genetic predisposition to a particular disease, their participation in the therapy would be more energetic and enthusiastic. A study involving 750 patients observed that more than 86% adhered to the prescribed therapy for up to 2 years, and had a positive approach to the treatment process, having realized that they have a genetic predisposition to familial hypercholesterolemia. Personalization of therapy also saves millions—possibly billions—of dollars in health care costs, reduces trial and error in prognosis, and improves clinical outcomes.

Companion diagnostics (CDx) falls within the larger field of study called pharmacogenomics, which is the use of a person’s genomic makeup to predict a drug response, or to tailor therapy specifically for that patient. The FDA describes CDx as a medical device, often an in vitro device, that provides information that is essential for the safe and effective use of a corresponding drug or biological product.

Frost & Sullivan estimates that the CDx market will reach $6.9 billion globally by 2020, with oncology being the biggest market. Exhibits 1 and 2 present a comparison between the U.S. and European markets for companion diagnostics, by common therapeutic areas. While both markets clearly indicate a strong support for oncological use of CDx platforms, the specific cancer type that the two markets are focusing on differ. In the United States, lung and blood cancers are the most important application areas, whereas in Europe, breast cancer dominates the market.

Human epidermal growth factor receptor 2 (HER2 or HER2/neu) is a protein that is expressed by the gene ERBB2. The overexpression of the HER2 protein has been strongly associated with breast cancer; HER2 is used as a biomarker or an indicator of breast cancer. CDx leverages this relationship to design therapies for patients.

Exhibit 3 illustrates how biomarkers are used to stratify patients into sub-populations that have comparable responses based on pharmacogenomic testing.

Technologies such as in situ hybridization (ISH), quantitative real-time polymerase chain reaction (qRT PCR) and immuno-histochemistry (IHC) have been traditionally used for diagnosing or detecting the relevant disease biomarker. However, the emergence of high throughput, sensitive approaches such as next-generation sequencing, single molecule real-time sequencing, digital pathology and quantitative histopathology have created a shift in the enabling technology platform for CDx. Quantitative histopathology and digital pathology are both medical imaging-based diagnostics approaches; they provides localization and measurement of protein biomarkers in a tissue sample. Tissue markers are identified and quantified using an automated, fluorescence-based imaging platform.

It Takes Two to Tango: The Need for Partnerships 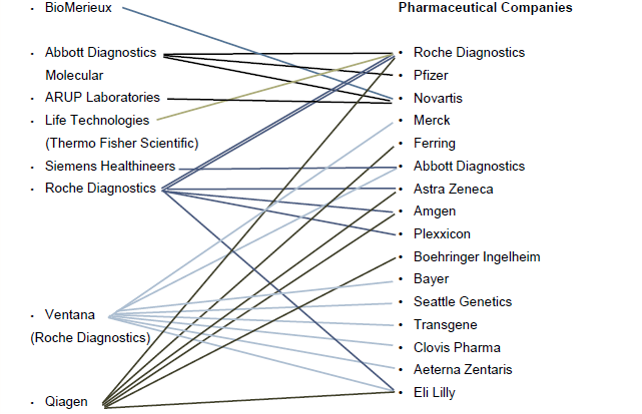 These partnerships have resulted in several CDx tests for oncology applications. Some of these are presented in Exhibit 5. In 2017, at least 387 targeted medicines are either in the pipeline or being marketed for oncology in the United States. Among these, breast cancer, non-small cell lung cancer, and colorectal cancer have the most targeted drug development activities.

In addition to serving as inclusive or exclusive tests for the therapies themselves, CDx will also play an important role in streamlining clinical trial participant selection. When the patient has the biomarker target that the drug is likely to respond to, there is a greater potential for the drug to show increased overall response.

Currently, a challenge to accurate and timely diagnostics is the difficulty in obtaining tissue specimens. Liquid biopsy is widely predicted to be the diagnostic tool of the next decade. These are minimally invasive diagnostic tools that enable the direct detection of cancer cells (circulating tumor cells), cell-free circulating tumor DNA (ctDNA), or extracellular vesicles, for accurate disease diagnoses.