Emerging Trends and Applications of Biosensors

A Frost & Sullivan study published in 2017 estimates that the global sensor market specifically for health care applications was valued at nearly $17 billion. Read more about how they are being used and the road ahead.

Biosensors are sensing platforms that incorporate a biological component in the detection of an analyte. Exhibit 1 segments the biosensor platform based on the key biological agents that are used. These elements will react with the target or the sample under study if there is an affinity. Based on this coupling, the transducer element transforms the signal into a readable output. 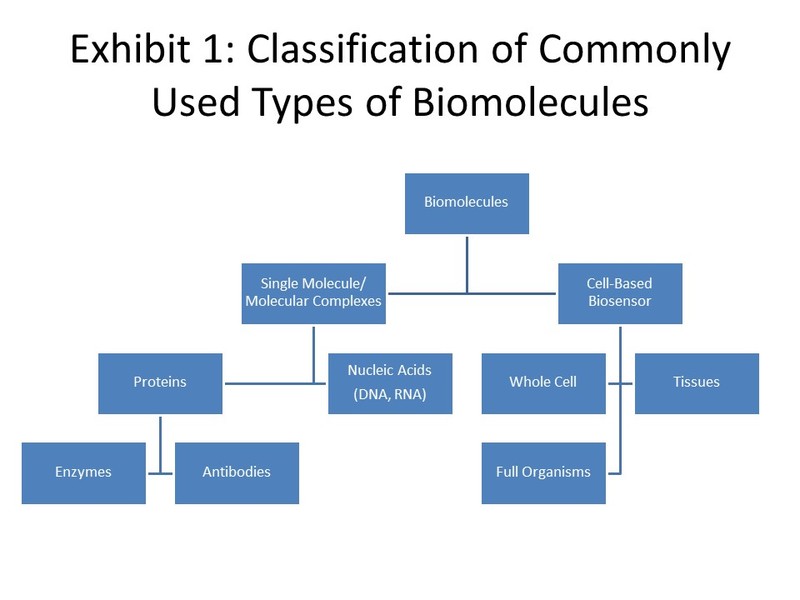 Exhibit 2 provides an overview of the detection process, delineating the different components and processes involved in the sensing process. Exhibit 3 provides a broad-based classification of the biosensor market by the technique used for detection. Together, these exhibits illustrate the general working of a biosensor platform. However, due to the ubiquitous nature of biosensors, this mechanism is barely recognized by end users. 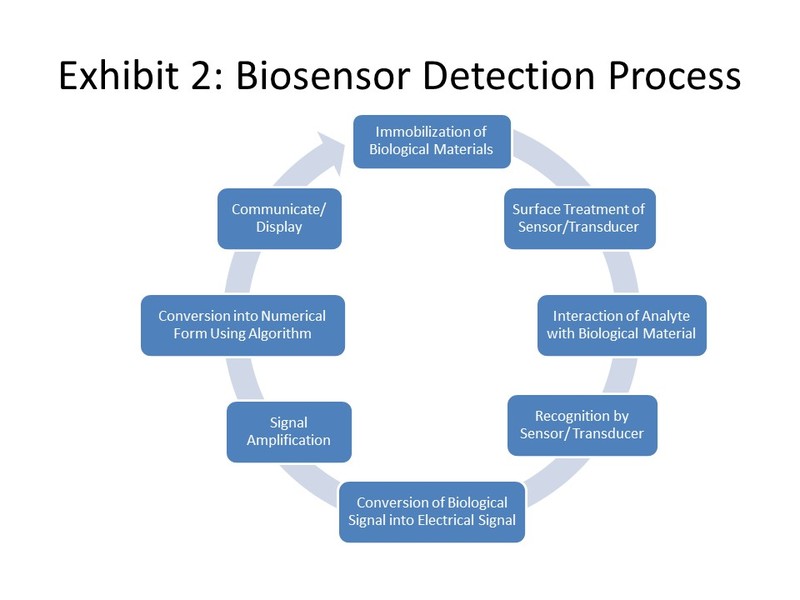 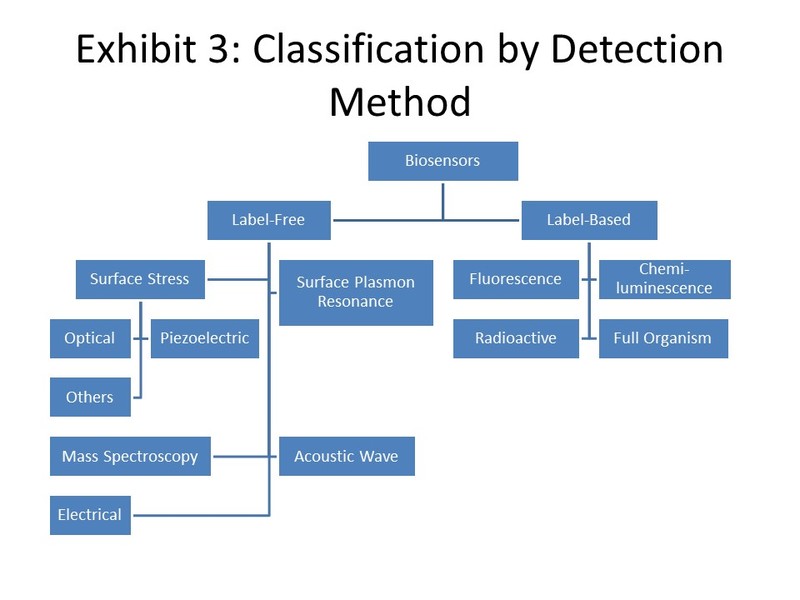 The use of biosensors has permeated the entire health care spectrum. Laboratory-based tests to diagnose infectious diseases employ biosensors, as do consumer health care products such as diabetes monitors and pregnancy test kits. A Frost & Sullivan study published in 2017 estimates that the global sensor market specifically for health care applications was valued at nearly $17 billion. Biosensors are by far the biggest market segment, contributing more than 68% of the market revenue. For comparison, gas sensors (the next-largest segment) contribute merely a 5.5% revenue share.

Biosensors cater to a wide variety of applications, ranging from personal health to clinical diagnostics, automotive, homeland security, and food and dairy testing. This article highlights some of the emerging and high-growth applications of biosensors and profiles innovators in the space.

Biosensor Applications Sweden AB was among the earliest companies to develop a multisensing platform for the purpose of simultaneous drug and explosive detection. This platform, called BIOSENS, combines cutting-edge microfluidics, biochemistry and microelectronics technologies with advanced data processing to enable real-time detection and analysis. BIOSENS 600, the flagship product based on this platform, can detect methamphetamine, cocaine, heroin, MDMA (ecstasy), cannabis and several more drugs, while also detecting TNT, nitroglycerine and other common explosive chemicals.

A multidisciplinary group of researchers at Amity University (New Delhi, India) has developed a reusable biosensing platform for the accurate, sensitive and early diagnosis of infectious diseases such as dengue, and other mosquito-borne diseases that wreak havoc in tropical climes. The researchers added a single-stranded DNA of the dengue virus on a nanoparticle-coated, fluorine-doped electrode. If the blood sample is infected with dengue, the biosensors will selectively and irreversibly bind to the complementary strand. The electrode is connected to a device that can quantify the process change, notifying the diagnosticians of an infection. When the electrode is treated with a sodium hydroxide solution, the sensor is regenerated and ready for the next test.

Biosensors to Detect Genetic Diseases and Screen for Mutations

Scientists at the University of California, San Diego, have developed an ultra-sensitive platform that can detect mutations in DNA. A large research team working under the leadership of the Center of Excellence for Nano-Medicine and Engineering has developed a sensor that can detect single nucleotide polymorphisms (SNPs) in a DNA sequence. SNPs are a variation of a single nucleotide in a gene sequence. This alteration is closely associated with a number of health conditions, including cancer, heart disease, diabetes and autoimmune diseases, although the mutation causes no immediately discernable health effects.

The team coated a graphene field effect transistor with an engineered DNA sequence that is complementary to the mutation that is being studied. As DNA or RNA sequences with SNP mutations are discovered, an electrical signal is produced as indication. The team envisions this biosensor to be an early avatar of a one-day implantable device that can detect SNPs and genetic mutations in real time and alert users on a mobile phone.

Wearable biosensors are gaining acceptance in continuous health monitoring. The sensing relies on wireless sensors enclosed in bandages or patches or in a body-worn form factor. The data recorded by biosensors is processed and is used to predict the possibility of a patient’s worsening clinical condition and also monitor the impact of needed clinical interventions. Sweat, blood and other biological agents are common analytes that are analyzed to produce clinical results. Germany-based Fraunhofer Institute has developed a non-invasive, wearable nano-biosensor for the continuous monitoring of glucose levels. The body-worn device measures the glucose levels using tissue fluids, such as tears or sweat. Still under development, this method of non-invasive glucose monitoring is viewed as the next benchmark for the wearables industry.

The ubiquity of biosensors—or any sensor, for that matter—has set the stage for sensitive data acquisition and quantification. The next logical step is for these sensors to converge into a wireless network and, if possible, communicate with one another. This will have implications for the Internet of Things: continuous innovations in biosensors and their integration into everyday consumer electronics formats are likely to create a seamless ecosystem of data that can be recorded, analyzed and acted upon in real time.