When "John Smith's" neuro-oncologist and surgeon track the growth of his glioblastoma—a particularly virulent and unpredictable form of brain tumor—they order another MRI scan to help them determine the best course of treatment and therapy. Then they compare images, but they have to allow for subtle inaccuracies they see because Smith's head was positioned differently during every scan series.

This year the project received a Phase II grant from the National Cancer Institute at the National Institutes of Health. Boston-based CorticoMetrics, LLC is co-developer of AutoRegister. The company is in partnership with grant subcontractor the Martinos Center for Biomedical Imaging at the Massachusetts General Hospital.

That earlier technology takes a set of quick, low resolution MR images of a subject's head, called a scout sequence, basically a quick "snapshot" image of the brain. Then it aligns the images to a template that's essentially the "average" of hundreds of subjects of scout images. It uses results of the alignment process to configure the MRI machine's imaging field-of-view (FOV) of the brain so the next MR images will be correctly aligned. 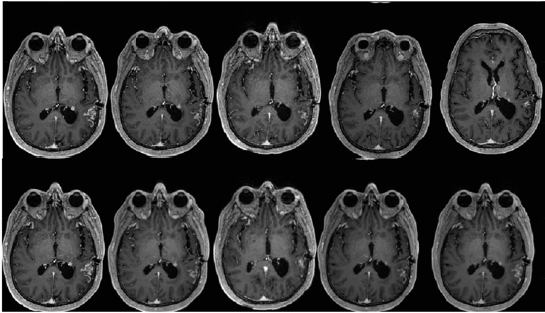 Comparable scan slices of a glioblastoma patient across five visits using AutoAlign (top) and AutoRegister (bottom). In the first three, AutoAlign placed the FOV in approximately equivalent positions, but fails on the fourth and fifth visits. AutoRegister succeeded in all five visits. Image credit: CorticoMetrics

By comparison and as an improvement, AutoRegister aligns its scout sequence to another sequence acquired at an earlier point in time from the same subject. Additionally, it uses a more sophisticated alignment algorithm that's not bothered by unusual structural tumor formations in the brain normally seen during the progression or treatment of glioblastoma, Wighton says.

The research team still must clear the hurdles of changing established hospital workflow such as integrating with hospital systems so that necessary prior scan data of a patient can be available to the MR scanner when needed.

"AutoRegister can be implemented quickly, with minimal workflow changes for the neuroradiologist," says Wighton. "That's important in a conservative hospital or health system environment that's typically resistant to adoption of new technology. We're attempting to do this automatically, with no apparent changes to users of the current clinical workflow."

You may ask, "So, what's the big deal about a patient's head being in a slightly different position?" First, imagine a potato on the counter, ready for slicing, suggests Nick Schmansky, co-founder and CEO of CorticoMetrics. "How you hold that potato for slicing makes a huge difference."

Remember Mr. Potato Head? Now imagine that the potato is the brain. "Even the tiniest difference in the angle of slicing can put a glioblastoma patient into a different category of treatment," Schmansky says. So if measurements are slightly off, and the incorrect category is assigned, the implications are obvious.

To understand more about the measurement process, get to know RANO criteria specifics, the current clinical standard of care for assessing response to glioblastoma treatments, suggests Wighton. "That involves scrolling through a series of MR slices to find the slice with the 'maximal diameter,'" he says. "Then find the largest perpendicular measurement and multiply these values together."

That's all well and good, except a two-dimensional measurement is used to infer the progression of a three-dimensional process, and it's extremely sensitive to head position, he says.

CorticoMetrics is also working towards delivering automated three-dimensional neuroimaging metrics to clinical care, which is one solution to this problem, says Wighton.

Technology 'Thinks' for Itself

The technology has wider usage applications, he says. "Preliminary studies indicate that this technology outperforms AutoAlign even in patient populations with typical anatomy," he says. That means they don't have diagnoses such as glioblastoma.

"We can see prior scan data and improved alignment techniques. They're just not as dramatic as the improvements we see in glioblastoma patients," Wighton says.

Those other patient populations without typical brain anatomy are what he calls natural applications, especially if those two-dimensional measures are used to infer the progression of a three-dimensional change in brain structure, he suggests.

An example is a condition called hydrocephalus, says Schmansky. With that, the measurement of the size of a ventricle containing excess fluid determines whether surgery can be conducted to install a shunt to relieve pressure on the brain.

It's a very small example of what's to come with what's called automated decision support in the medical environment. The automated component could mean that in 20 years an MRI scanner will acquire data and then automatically make decisions about what to acquire next, he says.

"If data doesn't look 'good,' the scanner will automatically retake that particular sequence," says Wighton. "If a brain tumor is detected in one sequence, the scanner could potentially order follow-up sequences automatically."

"What we've done here is incremental engineering," says Schmansky. "We're not all Steve Jobs. With most new types of technology, tiny improvements in engineering define what we do, and they do make a difference."

Scientists use nano or microneedles to provide quicker diagnosis of major illness.