The emergence of neuromodulation as a mainstream therapy is partially in response to the increasing and harmful dependence on prescription drugs. Frost & Sullivan identifies emerging approaches to modulate the nervous system and their numerous applications.

The International Neuromodulation Society defines neuromodulation as the alteration of nerve activity through targeted delivery of a stimulus, such as an electrical charge or chemical agents, to specific neurological sites in the body. In this article, Frost & Sullivan expands on this definition and identifies emerging approaches to modulate the nervous system and their numerous applications.

The emergence of neuromodulation as a mainstream therapy is partially in response to the increasing and harmful dependence on prescription drugs. This phenomenon is most commonly observed in the case of chronic pain. The National Institute of Drug Abuse estimates that more than 100 million Americans (nearly one-third of the U.S. population) suffer from chronic pain. Over the last 20 years, prescription of opioid drugs for pain management has increased more than 300%, prompting the U.S. Department of Health and Human Services to declare opioid dependence as a public health emergency. The agency reported that in 2016, about 116 Americans died from opioid-related drug overdoses every day. One of the consequences of long-term drug use is that the body develops a tolerance, rendering it ineffective. Other consequences include addiction, adverse reactions and toxicity. Even at their effective best, painkillers often provide only symptomatic and temporary relief from pain.

Neuromodulation techniques, on the other hand, target the way pathological tissues behave. By stimulating, subduing or otherwise modulating the nerve pathways that innervate the diseased tissues, neuromodulation aims to provide direct and long-term solutions to diseases.

Neuromodulation can also partially or completely restore hearing loss and treat some clinical conditions that medications and surgeries cannot. Due to their ease of use, relatively low risk of side effects, versatility and ability to provide long-term solutions, the diversity of applications has increased considerably over the years. Today, neuromodulation techniques are used in chronic pain management, treatment of neurological (epilepsy and stroke) and neurodegenerative (Parkinson’s and Alzheimer’s diseases) disorders, management of psychiatric and behavioral disorders (clinical depression, obsessive-compulsive disorder), physical and sensory rehabilitation, urinary incontinence and bladder control, and the management of lifestyle conditions such as obesity.

The most well-established approach to modulating the nervous system involves electrical stimulation of the brain or spinal cord (central nervous system), or the nerves that innervate different organs (peripheral nervous system). Four approaches immediately stand out based on the target organ that is being electrically stimulated: deep brain stimulation, spinal cord stimulation, sacral nerve stimulation and vagus nerve stimulation. Exhibit 1 lists some of the products that leverage these technologies, and the applications that they are cleared to treat or manage. These four approaches have been fairly well-established, as evidenced from their regulatory clearance and market position. 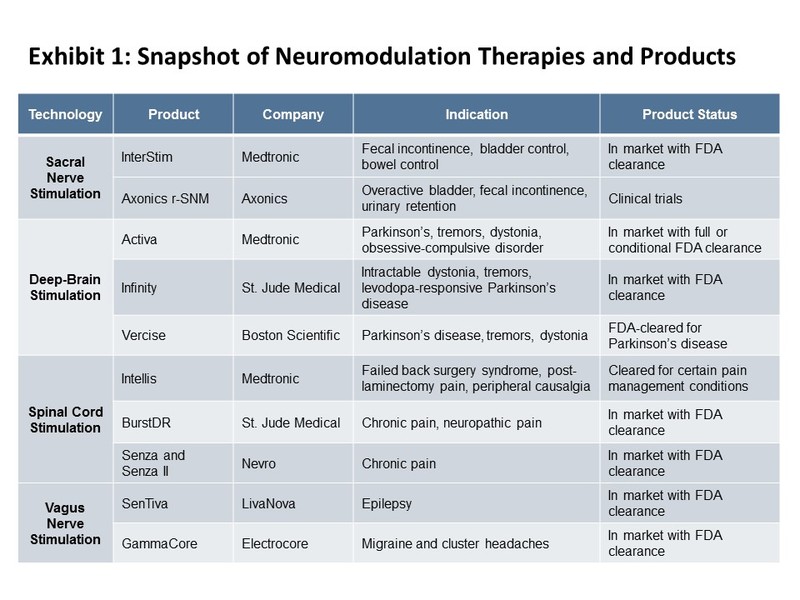 Other emerging techniques to neuromodulation are still gaining market acceptance but have demonstrated early clinical successes. Prominent among these is transcranial magnetic stimulation (TMS). This non-invasive procedure utilizes electromagnetic radiation to polarize the neurons in the brain. Using alternating magnetic fields, weak electric currents are induced in the brain through induction. Due to its noninvasive nature and localized impact, the technology is considered ideal in treating specific parts of the brain. There has been a marked increase in the number of studies that advocate the use of TMS for managing clinical depression, obsessive-compulsive disorder and a number of psychiatric conditions. In late 2017, Helsinki-based Nexstim announced the U.S. Food and Drug Administration (FDA) clearance of its NBT navigated brain therapy system for the treatment of major clinical depression, stroke and chronic neuropathic pain. Sensing the potential of this technology, health care major GE Healthcare has backed Nexstim in the development of its repetitive TMS technology. Lisa Spear, a science writer for Newsweek and Time, cites successful animal studies in managing brain cancer and opines that one day, TMS could be a tool to treat brain cancer.

Frost & Sullivan has often profiled innovations and advances made in the niche field of optogenetics, a promising field that has often teased the industry with its potentially game-changing ability but has not quite moved as fast as its appeal. This technology aims to control neuronal activity using light. Because of advances in genetic engineering, it is possible to sensitize neuronal proteins to light. By making them react to specific wavelengths, it is possible to increase or decrease neuronal activity, thereby controlling their firing during seizures, depression and diseases. Just this month, researchers at the University Medical Center Göttingen in Germany reported their success in designing a cochlear implant that responded to optical stimulation. The study conducted on small animal subjects provided a proof of concept that it was possible to genetically modify the cochlea of the ear to make them sensitive to certain light wavelengths.

Electrical stimulation has been used for several decades now—first crudely through shock therapies and then in a more refined and controlled manner. In 2015, GlaxoSmithKline, a leading pharmaceutical company, announced a grand initiative to develop electroceutical therapies to manage chronic diseases. The fact that a large pharmaceutical company would invest in a technology that could replace pharmaceutical approaches to therapy stands as a grand validation of the potential of neuromodulation.