Norman J. Holter, regarded as the father of mobile ECG monitoring, developed the world’s first ambulatory cardiology monitor—arguably the world’s first wearable device—in 1954. However, Holter was the first person to acknowledge the practical difficulties associated with the device’s form factor. Weighing 85 pounds and having to be strapped to the patient like a backpack, the device could not, in practice, be used throughout the day. He was determined to miniaturize the device, ultimately shrinking it to the size of a briefcase.

Even a visionary like Holter, who dreamt of a device to measure the cardiac activity of “skiers, parachute jumpers and runners,” would be surprised to learn that his efforts have paved the way for the world of wearable sensors, whose latest offerings include smart lenses and electronic tattoos. Exhibit 1 shows the progression of medical sensors, productized as diagnostic wearable devices. 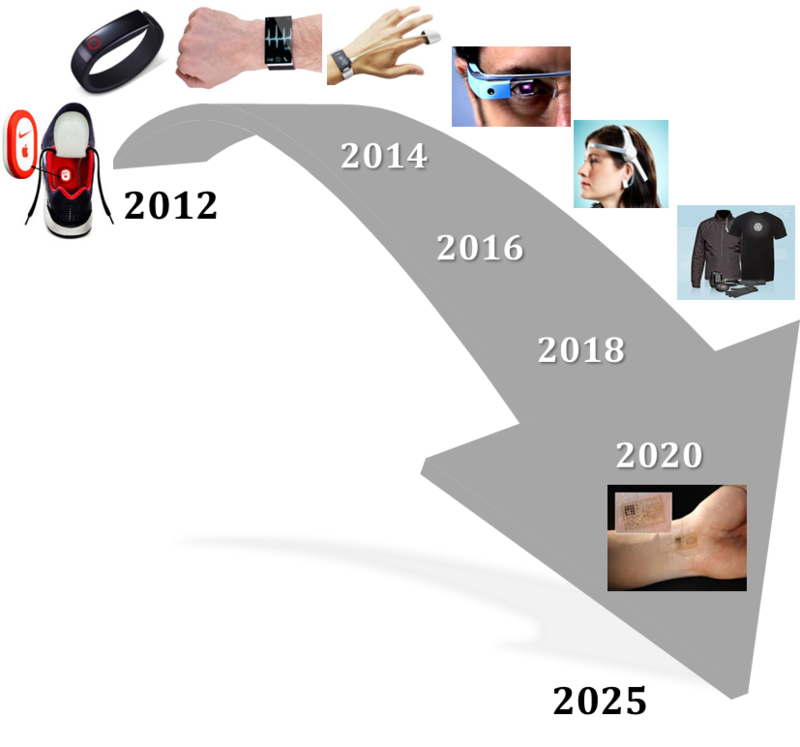 Healthwear: Bands, Bracelets and Beyond

The popularity of wearable devices, such as smart watches and bracelets, is evident from the numerous products that Apple, Samsung, Sony and other companies roll out every year. In users’ minds, wearable devices have become synonymous with activity trackers. Wearables are a great tool for tracking physical activity (e.g., Fitbit, Misfit, Moov) and sleep patterns (e.g., Pebble, Jawbone), but the utility of these devices goes far beyond tracking fitness and offering notifications on the go.

This fast-expanding family of electronic devices that look like—and sometimes mimic—conventional pills often include basic components such as sensors, processors and transmitters, but may also house a camera, on-board memory slots and batteries, all miniaturized to match the size of a multivitamin capsule.

Once these miniature sensor systems are ingested, they travel the length of the gastrointestinal tract, taking pictures and measuring acidity, core body temperature and chemical composition. Wireless capsule cameras have been widely commercialized, with companies such as CapsoVision, Given Imaging (now Medtronic) and Olympus having their products fast-replacing conventional endoscopes as the de facto tool for endoscopic examinations.

Proteus Digital has used the sensor as an enabling platform to develop a digital medicine system. Using grain-sized wireless ingestible sensors, a wearable sensor patch and a mobile app, its system provides unprecedented, real-time physiological insights that can be used for a number of applications, including ensuring medication compliance.

While the EEG has been around for several decades, it has only recently been adapted to a portable form factor. Lightweight, wireless EEG headsets measure brain activity and transmit information to a smartphone or a computer. Continuous brain activity recording can provide physicians with information on mood swings, cognitive and behavioral development, sleep quality, impending seizures and other parameters.

At least a dozen companies, including NeuroSky, Emotiv, Interaxon, Advanced Brain Monitoring, and Thync, have developed clinical-grade EEG headsets for numerous applications. Brain activity monitors can play an important role in mental health monitoring and treatment, and are the foundation for brain-computer interface—a promising field for neuroprosthetics.

The failure of the Google Glass notwithstanding, the company has been a champion of smart lenses. In fact, even as the Glass was dismissed as being too gimmicky, Google developed a smart contact lens prototype. The claim is that the sensor-lined lens could measure the glucose level in tears and intraocular pressure. Such a system could usher in radical medical changes, such as noninvasive glucose monitoring, continuous eye tests, and stroke monitoring.

Despite continued miniaturization, wearable devices are often considered to be bulky, conspicuous, and unfashionable. The solution may be to directly integrate sensors into clothing. Companies including Levi’s, AiQ Smart Clothing and BeBop are working on smart fabrics that will be in constant contact with the wearer to measure pulse rate, blood pressure and heart rate.

Perhaps the ultimate form of technology integration would be an electronic tattoo—stretchable, skin-like material with electronic circuits and sensors printed on it to sense electromyographic signals, measure blood toxicity levels, pick up precise electrical data from the heart or brain and accurately measure physiological parameters.

From Medical Sensors to Internet of Medical Things

The new class of medical sensors could accurately measure patient parameters, record them on computers, and monitor patients remotely and around the clock. Along with heath wearables, sensors on hospital beds, infusion pumps and other medical equipment can create a digitally connected world for continuous patient care, seamless clinical workflow and improved clinical outcomes.