Neurostimulation: A Shot of Caffeine to the Nervous System

From being considered a crude procedure to manage psychiatric conditions (electrotherapy), neurostimulation has emerged as a promising treatment option. for a wide variety of health conditions, including migraines, urinary incontinence, depression, chronic pain, sleep apnea, and spinal cord damage.

The International Neuromodulation Society defines neurostimulation as the alteration or modulation of neuronal activity by delivering electrical or pharmaceutical agents directly to the target site. While electrical stimulation is the largest and most prominent neuromodulation modality, Frost & Sullivan has broadened the scope of the technology to include electrical, magnetic, chemical, pharmaceutical and other miscellaneous agents that can stimulate or suitably modulate the nervous system. Neurostimulation technologies are often cross-referenced with the part of the nervous system (e.g., brain, spinal cord, peripheral nerves) that they target. 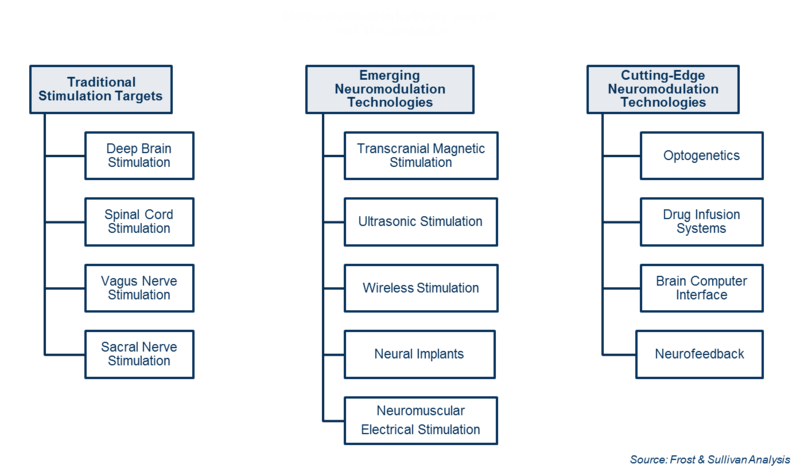 From being considered a crude procedure to manage psychiatric conditions (electrotherapy), neurostimulation has emerged as a promising treatment option. Nerves are ubiquitous in the body; technically, neuromodulation can treat or manage a wide variety of health conditions, including migraines, urinary incontinence, depression, chronic pain, sleep apnea, and spinal cord damage.

DBS first received U.S. Food and Drug Administration approval in 1992 for the treatment of tremors. It was approved for the management of Parkinson’s disease in 2003. The procedure has also shown benefits for depression, obsessive-compulsive disorders, Tourette’s syndrome, chronic pain and cluster headaches.

The most common use of SCS is to manage chronic pain from failed back surgery syndrome (FBSS). Clinical studies found that between 20% and 40% of patients with chronic back pain who undergo surgical intervention suffer from FBSS. SCS is also being tested for management of diabetic neuropathic pain and to treat urinary incontinence.

Sacral nerves originate at the lower portion of the spinal cord and proceed to the urogenital system, influencing bladder and bowel control and sexual function. Mild electrical stimulation (transcutaneous or subcutaneous) of the sacral nerve is used to treat urinary and fecal incontinence, constipation and urinary problems.

The vagus nerve is a cranial nerve that originates at the medulla (brainstem) and proceeds down the throat to the gastrointestinal system. Stimulation of the left branch of the vague nerve can control intractable epilepsy. VNS has been investigated for the treatment of autism, alcohol addiction, bulimia, anxiety disorders, Alzheimer's disease and tinnitus.

Four major companies—Boston Scientific, Medtronic, St. Jude Medical (acquired by Abbott Laboratories) and LivaNova (formerly Cyberonics) control more than 80% of the $2.8 billion U.S. market. Competition is intense with a propensity for mergers and acquisitions and a strong M&A culture, giving start-ups both nightmares and daydreams.

Other indication areas that have witnessed increased interest are migraine and cluster headaches. Start-up companies such as Cefaly, ElectroCore and Theranica are active in this space, with approved products already in the market.

The Road Ahead: The Future of Neurostimulation

The current generation of neurostimulation technologies places a lot of importance on features such as portability, a wearable form factor and minimally invasive administration. Noninvasive and noncontact device are leveraging magnetic fields and ultrasonic waves for neural stimulation.

Technologies that are in the early stages of development include optogenetics, which use of genetically altered neurons that can be controlled using light pulses; implantable drug infuse systems that deliver drug to the spinal cord; neuro-bio feedback, a teaching and training technique that programs the brain to self-regulate, and brain-computer interface, which establishes a communication channel between the brain and an external device. However, these technologies have yet to advance past animal studies.

On the whole, the lengthy development time and the even longer regulatory approval period have resulted in a thriving but congested product pipeline. An abundance of neurostimulation products are expected to hit the market in the next five years.