Nuclear Medicine: The Next Frontier in Medical Imaging

Functional nuclear medicine is an emerging field of diagnostic imaging that is primarily used to analyze metabolic processes in the body. Frost & Sullivan continues to study the nuclear imaging market and the gradual market saturation of stand-alone systems and the move toward hybrid systems.

Functional nuclear medicine is an emerging field of diagnostic imaging that is primarily used to analyze metabolic processes in the body. A radioactive isotope, also referred to as radionuclide, is used as a tracer or a label to observe specific biomolecules as they are consumed during metabolism. Indirectly, the metabolic activity of various tissues is studied as a proxy to understand the functioning of the target organ. A typical application of nuclear imaging is the use of fludeoxyglucose (FDG), a radioactive analog of glucose, in the study of glucose consumption in tissues. Cancerous tissues, which metabolize much faster, are observed through intense radiolabeling to have a higher concentration of FDG. Thus, nuclear medicine is often used to diagnose and stage cancers and to monitor treatment. 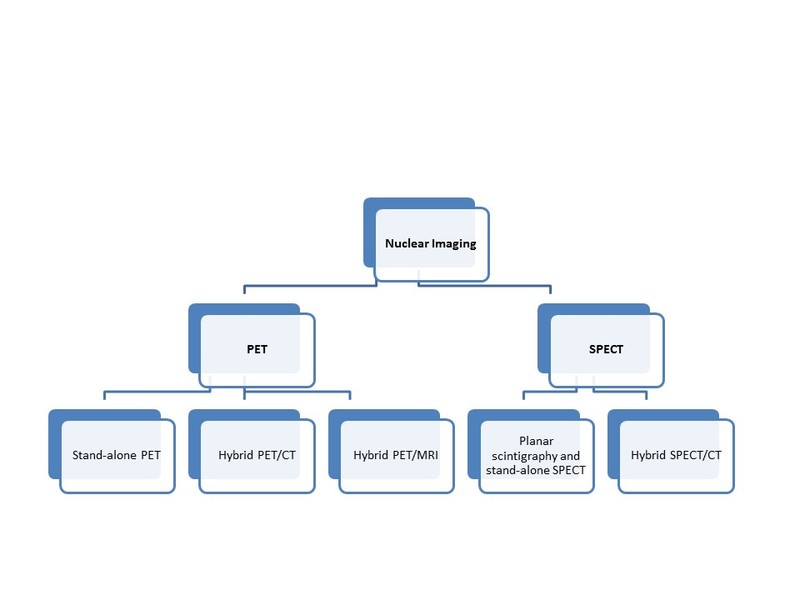 Frost & Sullivan continues to study the nuclear imaging market, and in March published a report that captures the gradual market saturation of stand-alone systems and the move toward hybrid systems.

Hybrid PET/CT has quickly replaced stand-alone PET as the de facto standard for PET imaging, mainly to provide CT-based attenuation correction. Despite the higher costs, the combination of PET and CT modalities considerably increases the clinical utility of PET. In fact, PET/CT is a larger and faster-growing segment than SPECT/CT because of superior quantitation accuracy and better imaging. Segment value was estimated at $220 million in 2016, and is poised to reach $300 million by 2022.

The PET/CT landscape in the United States is dominated by GE Healthcare, Siemens Healthcare and, to a lesser extent, Toshiba and Philips. Together, these companies have traditionally captured more than 90% of segment revenue, with little elbow room for newer companies to make their mark. However, that may be changing: this dominance has experienced vulnerabilities over the last two years with the launch of the NeuSight PET/CT from NeuSoft in 2016 and the Celestion PET/CT from Toshiba Medical Systems in 2014.

A SPECT/CT hybrid imaging platform provides complementary functional and anatomic image data in a single examination, improving the depth of information and bringing context to diagnosis. Its use is more widespread than stand-alone SPECT systems. SPECT/CT has proven to be a valuable tool in oncology. For example, in a patient with metastatic thyroid cancer, neither SPECT nor CT alone could identify the site of malignancy. SPECT/CT, a hybrid image, precisely identifies the spot where the surgeon needs to operate.

Frost & Sullivan pegged this market segment at $65 million in 2016, and predicts conservative growth over the next five years. In fact, the continuing shortage of molybdenum-99 (Mo-99), a precursor molecule to the widely used SPECT radionuclide technetium-99 (Tc-99m), has slowed the growth of SPECT imaging. Tc-99m supply fragility is not expected to be resolved before 2018. This will result in market stagnation or even a contraction over the next couple of years, followed by slow growth. Segment revenue is expected to reach $75 million by 2022.

This segment presents an even more consolidated picture, with only two large companies—GE and Siemens—cornering as much as 95% of the market; Philips has decided to focus solely on PET/CT.

PET/MRI is the newest imaging modality in the hybrid imaging category, combining the superior soft tissue imaging of MRI and the ultra-sensitive metabolism-based functional diagnosis offered by PET. Traditionally, a limitation of this modality was its cumbersome and disrupted workflow. Since the MR scanner’s magnetic core is susceptible to interference from any metal in the vicinity, a patient had to be transported to separate rooms that housed a PET/CT or MRI scanner. Image fusion was performed during the post-processing stage using the separately acquired PET and MRI data sets.

This handicap was overcome with the introduction of Philips’ Ingenuity TF PET-MR system, with separate PET and MRI gantries that are installed in a single room and joined by a motorized table that rotates and moves patients from one gantry to the next for sequential PET and MRI scans. Despite this breakthrough, the growth of the PET/MRI segment is limited by its steep price point. At $3.5 million a unit, a PET/MRI system is unattainable by small and midsize hospitals, and becomes the prized possession of a handful of well-funded and specialized healthcare centers. This is reflected in its rather small market size, at $45 million in 2016, and the conservative growth estimate over the next five years. In fact, Philips, arguably the pioneer in this space, has discontinued the product line, citing market adoption challenges, further consolidating the market between GE and Siemens.

Despite teasers and hype, nuclear imaging has struggled to revolutionize the imaging industry the way it promised to. Challenges still exist in reliability, pricing and product positioning, and the erratic supply of radiopharmaceuticals, high developmental cost and lack of alternatives in the nuclear imaging space. The emergence of hybrid imaging systems have assuaged some of those concerns, as has the emergence of young companies.

China-based NeuSoft has designed a patient-friendly gantry, integrated the workflow, and tweaked the instrumentation to improve image quality. Its NeuSight, a new PET/CT system, is for detection of myocardial ischemia and coronary heart disease. Launched in 2016, NeuSight has received clearance from the U.S. Food and Drug Administration (FDA) and has obtained the CE mark for clinical use in Europe.