Putting the Freeze on Ice Recrystallization

New classes of molecules based on naturally occurring sugars promise to preserve cryogenically frozen cells and perhaps organs without any of the toxic side effects of current treatment.

New classes of molecules based on naturally occurring sugars promise to preserve cryogenically frozen cells and perhaps organs without any of the toxic side effects of current treatment.

New chemicals have been developed by a team led by University of Ottawa chemistry professor Robert N. Ben, who directs the school’s biopharmaceutical sciences program. In addition to improving the viability of frozen cells, his research provides key insights into the types of chemical structures needed to keep ice from destroying frozen cells during thawing.

The only way to preserve umbilical cord blood or bone marrow for long-term storage or shipment is to freeze it at cryogenic temperatures far below its freezing point. At first, this produced ice inside the cells that destroyed their structures.

Over time, however, researchers developed cryogenic protocols to vitrify water, turning it into a glassy, syrupy state while minimizing the formation of ice crystals that could damage the cells. Unfortunately, they have not been as successful when thawing vitrified cells and organs. Intracellular ice recrystallizes as it thaws, forming larger and larger crystals that puncture cell membranes.

To prevent ice forming inside cells, current cryopreservation methods add an organic solvent called dimethyl sulfoxide (DMSO) to the cells before freezing. Yet too much DMSO is toxic to cells, and washing the cells to remove it before using them decreases their viability. 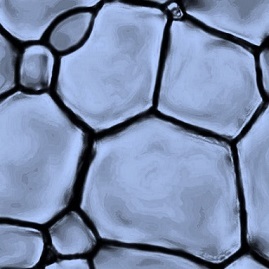 Large ice crystals that could potentially puncture a cell membrane, formed when a liquid containing no cryoprotectant was thawed after rapid freezing. Image: Ben Lab.

Only 70 to 80 percent of blood-forming stem cells typically survive after cryopreservation with DMSO. This poses a problem when working with stem cells, since only a few types may be useful for a particular treatment. Often, there are so few of those desired stem cells that each one is needed to increase the chance that they will take hold and save a patient’s life, Ben said.

Ben’s goal is to develop new cryoprotectant molecules that inhibit ice recrystallization, reduce toxicity, and improve the viability of cells after thawing.

Over the past few years, his lab has synthesized and tested more than 1,100 uniquely structured small molecules. Last year, he unveiled a class of molecule, N-aryl-d-aldonamides, that he could add to conventional cryoprotectant systems to reduce toxicity and improve the ability of stem cells to form colonies and establish cultures. Progenitor cells cryopreserved with the best ice recrystallization inhibitors of the collection formed 2 to2.5 times as many colonies after thawing than cells preserved using the conventional approach. The colony-forming ability of these cells is considered the best indicator for a successful cell transplant.

When identifying molecular structures that could be good ice recrystallization inhibitors, Ben first looked to natural antifreeze proteins found in cold-water fish and ice-dwelling microbes. Rather than recreate the natural proteins, he synthesized key parts of the protein, short segments decorated with sugars.

A few years later, he discovered that the correctly structured sugar could inhibit ice recrystallization. Sugars bind water and that disrupts the organization of the water surrounding the sugar. A hydrated molecule surrounded by a disordered cluster of water is harder to fit neatly into an ice crystal than one surrounded by an ordered shell of water. That means water treated with these sugar-based cryoprotectants forms small ice crystals instead of large ones.

Some cryoprotectants the Ben group studied have just one or two sugars. Others modify the sugars to change how they interact with water. Sugars bound to the acid part of a fatty acid, which leaves them with a dangling greasy hydrocarbon tail, assemble into micelles. These are shaped like small spheres, with the sugar on the outside of the sphere and the hydrocarbon tails dangling towards the center. Like isolated sugars, the spheres also disrupt the ordering of water molecules.

When Ben connects a sugar to a hydrocarbon tail via an amide linkage, the molecules bind water at room temperature to make a material similar to gelatin. At cryopreservation temperatures, these aldonamides are the most efficient ice recrystallization inhibitors of all the classes Ben has studied.

To study how a molecule affects ice recrystallization, the researchers perform a splat cooling test. First, they drop an aqueous solution containing a molecule onto an aluminum block precooled to -80°C to form a frozen wafer. They then warm the block to just below freezing and use a digital camera attached to a light microscope to take a picture of the resulting ice crystals. Using an image analysis program, they quantify the size of the grains in the ice crystals and compare the mean grain size relative to a solution without a recrystallization inhibitor.

After years of building and testing molecules with different structures, Ben says they now have a good understanding of the specific structural requirements a molecule must have to inhibit ice recrystallization. Yet structural changes that inhibit ice growth may also reduce a molecule’s solubility or introduce undesired biological properties. As a result, Ben’s team must still tailor each new molecule for specific applications and cell types.

The researchers have yet to do detailed toxicological studies on their molecules. Sugars are generally nontoxic, and the team has not seen toxic effects in the past three years, Ben said.

They are now testing their molecules with different cell types, including engineered immune cells for cancer treatment. He is also working to commercialize the molecules, and his long-term goal is to test them in cryopreserved organs.

“Researchers studying ice recrystallization inhibitors think that this work will make such a large impact that it will help us figure out how to properly prepare organs for storage,” he said.

Melissae Fellet is a science writer based in Missoula, MT.

For the First Time, Gene Therapy Delivered Straight to the Lungs

MIT bioengineers advance a technique to deliver nucleic-acid-based treatment to the lung by a noninvasive aerosol inhalation.

Capsule Delivers Week of Alzheimer’s Drug in One Dose

Lyndra Therapeutics released its first clinical results based on a single capsule that delivers a steady, week-long supply of Alzheimer's medication.

For the First Time, Gene Therapy Delivered Straight to the Lungs

MIT bioengineers advance a technique to deliver nucleic-acid-based treatment to the lung by a noninvasive aerosol inhalation.