Researchers who study treatments for osteoporosis-related fractures have discovered that the spongy tissue found at the end of long bones and vertebrae could help engineers design materials that bounce back and continue to perform after they are damaged.

Engineers are constantly searching for new materials to make more resilient parts for automobiles, aircraft, and machines used in remote or hard-to-reach locations.

Now researchers who study treatments for osteoporosis-related fractures have discovered that the spongy tissue found at the end of long bones and vertebrae could help engineers design materials that bounce back and continue to perform after they are damaged.

Long bones like the femur are made of two types of tissues: a hard, compact outer shell called cortical bone and a less dense material called cancellous bone. Cavities within cancellous bone host blood vessels or marrow, but they reduce the strength and rigidity of the spongy bone compared to the cortical bone, which makes up 80 percent of the bone mass. 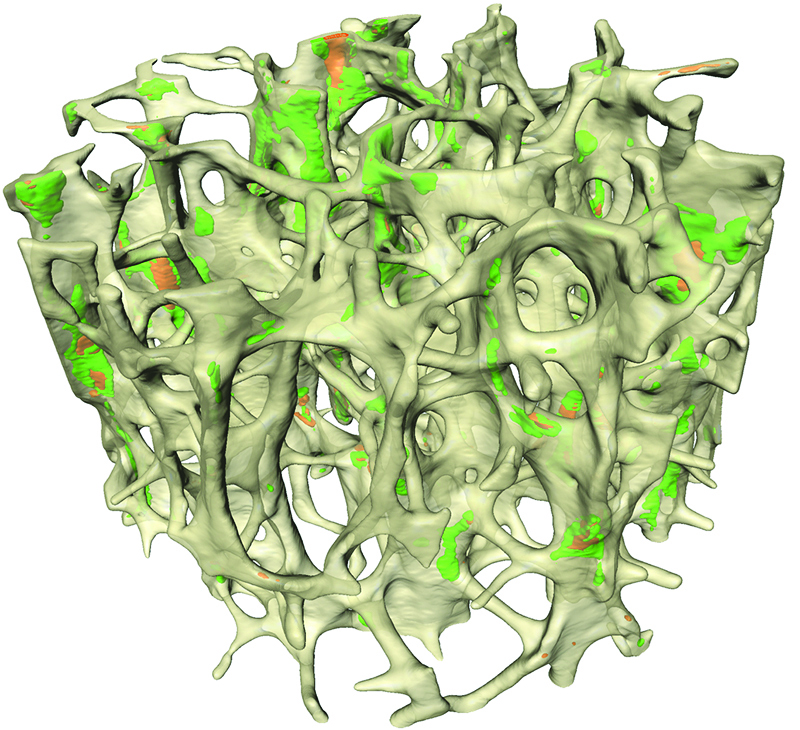 Cancellous tissue, depicted in a computer graphic, forms at the end of bones, near joints, and in vertebrae.  Image: Christopher Hernandez

Christopher Hernandez, an associate professor at Cornell University’s Sibley School of Mechanical and Aerospace Engineering and the Meinig School of Biomedical Engineering, and his team at first thought that the tiny cavities found in cancellous bones would promote crack growth. This would be a particular problem for people with osteoporosis, which causes more mass loss in the spongy bone than elsewhere. Instead, they found that cancellous bone—which is made up of a soft exterior and a stiffer interior—bounces back to almost its original form right after it’s damaged and before the healing process begins.

“We were very surprised,” Hernandez said of the findings.

The material heterogeneity actually drives damage to the center of the bone’s struts, which makes their surfaces more tolerant of flaws. In contrast, the surface treatments manufacturers use to strengthen materials often reduce surface ductility, Hernandez said.

The findings also upend the belief that the mechanical function of cancellous bone serves the same purpose as foam in engineering applications: to absorb energy and make the structure more lightweight.

“This is important mechanically because when you take a whole spongy bone and crush it, the damage is going to the middle of the strut, so it recovers most of its deformation and prevents it from snapping,” he said. “It makes the structure more tolerant of stress concentrations. That’s something mechanical engineers are always worried about, because that’s where cracks start and grow from.”

Hernandez’s research is supported by grants from the National Institutes of Health and the National Science Foundation. His team published its findings in Proceedings of the National Academy of Sciences.